Exports of oil and gas

Norway is a small player in the global crude market with production covering about 2 per cent of the global demand. Norwegian production of natural gas covers approximately 3 per cent of global demand, however, as an exporter Norway is a significant player. Norway is the third largest exporter of natural gas in the world, behind Russia and Qatar. In recent years, Norway has supplied between 20 and 25 per cent of the EU and United Kingdom gas demand. Nearly all oil and gas produced on the Norwegian shelf is exported. Combined, oil and gas exceeds half of the total value of Norwegian exports of goods. This makes oil and gas the most important export commodities in the Norwegian economy. 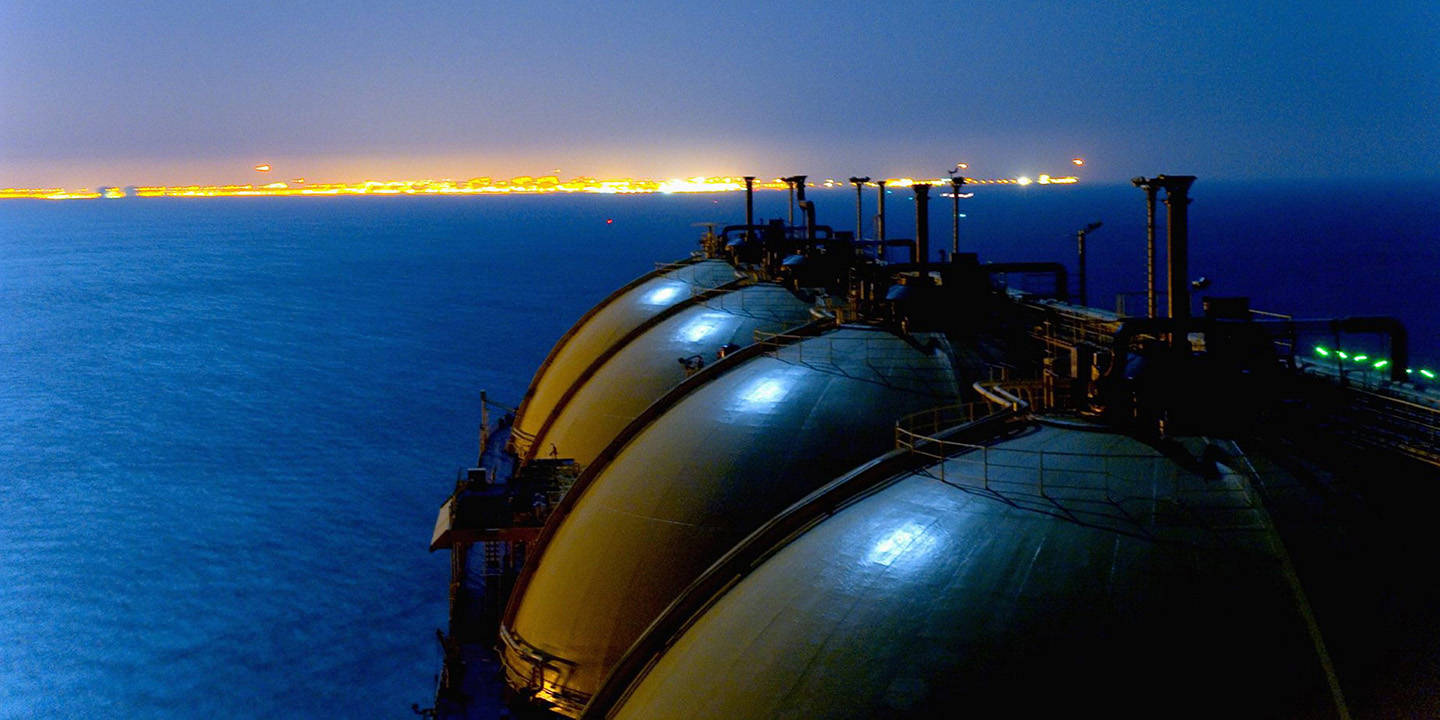 Norway is a small player in the global crude market with production covering about 2 per cent of the global demand. Norwegian production of natural gas covers approximately 3 per cent of global demand, however, as an exporter Norway is a significant player. Norway is the third largest exporter of natural gas in the world, behind Russia and Qatar. In recent years, Norway has supplied between 20 and 25 per cent of the EU and United Kingdom gas demand. Nearly all oil and gas produced on the Norwegian shelf is exported. Combined, oil and gas exceeds half of the total value of Norwegian exports of goods. This makes oil and gas the most important export commodities in the Norwegian economy.
Oil and gas exports Liquids Natural gas

Norway is an important supplier of oil and gas to the global market, and almost all oil and gas produced on the Norwegian shelf is exported. Company and government revenues from the sale of oil and gas have played a crucial role in creating the modern Norwegian society.

The export value of crude, condensate and natural gas in 2021 was about NOK 832 billion.

Crude oil and natural gas amount to 60% of the total value of Norway’s exports of goods in 2021.

Oil is a global commodity that is sold and delivered to most parts of the world. In contrast, there have historically been geographically separate regional gas markets. Gas markets have become more globalised as production and trade with liquefied natural gas (LNG) increase. About 95 % of Norwegian gas is transported via an extensive network of subsea pipelines to other European countries, while about 5 % is exported as LNG by ship from the Melkøya facility in Hammerfest.

What is produced on the Norwegian shelf?

Crude oil is a fluid that is a combination of different types of hydrocarbons. The composition varies from field to field. The quality of the oil depends on several factors, for example how much and which substances, such as wax and sulphur, it contains. The composition also determines how light or heavy (viscous) the oil is.

Rich gas, or crude natural gas, is a mixture of various gases. When necessary, the gas is separated from the oil before the rich gas is treated in a processing facility that separates the dry and wet gas components. Dry gas is often referred to as natural gas, and consists mainly of methane, but also a little ethane.

Wet gas, or NGL (Natural Gas Liquids), consists of a mixture of heavier gases (ethane, propane, butane and naphtha). In addition there are heavier condensates which some classify as a separate product. Naphtha and condensate are liquid at room temperature, while the lighter wet gas components can be made liquid either by cooling or by adding pressure.

Not all gas that is produced is sold. Some of the gas is used to generate power on the fields, and small amounts are flared for safety purposes. On some fields, gas is reinjected into the reservoirs. Reinjection is often used to maintain reservoir pressure and displace the oil. This results in efficient recovery of the oil, and the gas is stored for possible recovery in the future. 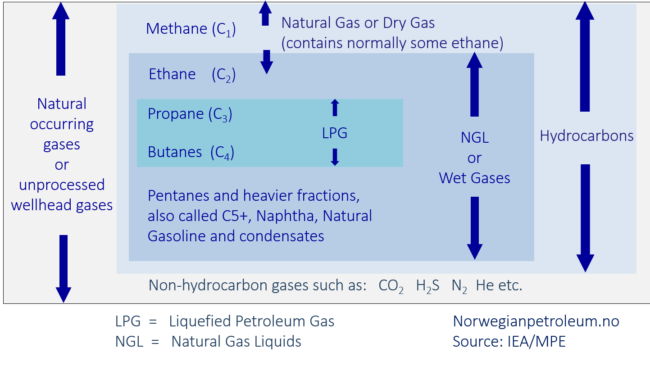 The numbers are inflated with CPI Norway. 2021 are preliminary numbers.

Exports of oil, condensate and NGL

The tables below show sales of crude, NGL and condensate in 2021 by first delivery point.

Sale of NGL and condensate in 2021, by first receiving country

In 2021, oil was the largest energy source globally, followed by coal and gas. Oil meets about 31 % of total world energy demand.

What is oil used for?

The transport sector consumes more oil than any other sector. The second largest sector in terms of oil consumption is the petrochemical industry, and manufacturing of plastics is the most important branch of this sector. The petrochemical industry also includes the manufacture of other oil-based products such as paints, cosmetics and textiles and so on. Moreover, oil is used as fuel in other energy-intensive industries such as iron, steel and cement production. Other main uses of oil is to generate electricity and heat, and as an input for asphalt.

The US was the largest oil producer in 2021, followed by Saudi Arabia and Russia. OPEC, the Organization of the Petroleum Exporting Countries, accounts for about 30 % of global crude oil production. However, several major oil producers, including Russia and the US, are not OPEC members.

The graph below shows the average annual oil prices (Brent) from 2015 - 2021. The spot price does not need to reflect achieved prices from sales of oil produced on the Norwegian shelf.

Norway and the 10 largest oil producers in 2021

The oil from the Norwegian continental shelf is either transported by ship or through pipelines to a final delivery point on land. See article about the pipeline system for more information about oil pipelines on the Norwegian shelf.

Oil is transported from many fields on the Norwegian shelf to the markets using shuttle tankers. These are specialized tankers that take on oil via offshore loading buoys on the oil fields. Oil platforms often have limited storage capacity, and regular calls by shuttle tankers are needed to avoid stoppages because of capacity problems. Shuttle tankers are usually used for relatively short transport distances, and most Norwegian oil is therefore delivered to destinations in north-western Europe.

Larger tankers are used to carry oil that is to be transported further, for example from Norway to Mediterranean countries, Asia or America. They do not carry oil directly from the offshore fields, but from onshore terminals, which are supplied either by shuttle tankers or by pipelines from the oil fields. Pipelines are used to transport oil from the Norwegian shelf to four onshore terminals: Sture, Mongstad and Kårstø in Norway, and Teesside in the UK.

The value of Norwegian gas exports in 2021 were higher than the value of Norwegian oil exports (including NGL and condensate), as a result of exceptionally high gas prices in the second half of the year. Domestic consumption of gas in Norway is very low, and nearly all the gas produced is exported.

An extensive network of subsea pipelines links Norway’s offshore gas fields and onshore terminals directly to other recipient countries in Europe. The total length of the Norwegian gas pipeline network is about 8 800 kilometres, which is roughly the distance from Oslo to Bangkok. See article about the pipeline system for more information about the gas pipelines on the Norwegian shelf.

In addition, liquified natural gas (LNG) is shipped out from the Snøhvit field off Hammerfest on LNG carriers. Approximately 5% of Norwegian gas exports is LNG.

What is liquefied natural gas?

Liquified natural gas, or LNG, is produced by cooling and pressurising natural gas to a liquid state. It is transported on dedicated LNG carriers.

The advantage of LNG is that transport does not require pipelines, and it can therefore be sold anywhere in the world. However, conversion to LNG and transport by LNG carrier is considerably more energy-intensive and expensive than pipeline transport.

At present, only gas from the Snøhvit field is converted to LNG on a large scale in Norway. Globally, the supply of LNG has been growing rapidly over the last decade. It has mainly been driven by developments in the United States and Australia, amongst others and increasing demand, primarily in Asia. The growth is expected to continue the coming years.

Norwegian gas exports maintained on a stable high level in 2021, and Norway exported about 114,8 billion Sm3 gas (not normalised to 40 MJ/Sm3), mainly to other countries in Europe. The gross energy content in the total volume of Norwegian sales gas corresponds to about nine times normal Norwegian electricity production

In much of Europe, gas is an important source of energy for heating homes and industrial buildings, gas is used for cooking, as feedstock in industrial processes and is used in gas-fired power plants to generate electricity. Norwegian gas provides between 20 and 25 % of the EU and United Kingdom gas demand and makes an important contribution to energy security in Europe.

How is natural gas used and what is driving growth in consumption?

Natural gas meets about 25 % of total world energy demand, and thus, like oil, plays a very important part in meeting global energy needs. Natural gas has accounted for almost one third of the world's energy consumption growth during the last decade, and the use of natural gas is expected to increase in the future as well. Natural gas is used mainly for heating homes and commercial buildings, cooking and power generation and in the petrochemical industry.

Many of the products we use every day, such as cell phones, makeup, sunglasses, computers, medications and fertilizers for agriculture are made with natural gas as a feedstock. Natural gas is transported by pipeline or is cooled and pressurised to produce LNG, which is transported on LNG carriers. Economic growth, the prices of alternative energy sources, weather, temperature, climate change adaptation and mitigation measures are all factors that influence gas demand.

Gas is also a good partner for intermittent renewable energy. Unlike hydroelectric power, other renewable energy sources such as sun and wind cannot be stored over time and are as such less flexible. In the absence of effective storage capability of energy, gas can produce power when the sun does not shine and the wind does not blow. As Europe is getting more and more intermittent renewable energy sources, the more Europe will need the kind of flexibility gas can provide in order to balance fluctuations in the energy supply and ensure that consumers have reliable power supply.

Norway is the third largest gas exporter in the world (2021). Several of the world’s largest gas producers export little to other countries. When assessing the global gas market, it is therefore most important to consider which countries have the largest volumes available for export.

The graph below shows the average annual European gas prices (TTF) from 2015 - 2021. The spot price does not need to reflect achieved prices from sales of gas produced on the Norwegian shelf.

Only about 40 per cent of Norway’s estimated gas resources have been produced so far. The production level is expected to remain high for the next 10-15 years. If the most optimistic resource estimates prove to be correct, production figures will be higher than the current forecasts.

Most natural gas from Norway which is sold on the European market is delivered to gas receiving terminals in Germany, the UK, Belgium and France through the Norwegian gas pipeline network. The total length of the pipeline network is about 8 800 kilometres, which is roughly the distance from Oslo to Bangkok. Norwegian gas accounts for a large portion of the total gas consumption in these four gas receiving countries; however, much of the gas is transported further to other European countries.

The NPD’s estimates indicate that oil and gas production is expected to increase until 2025.