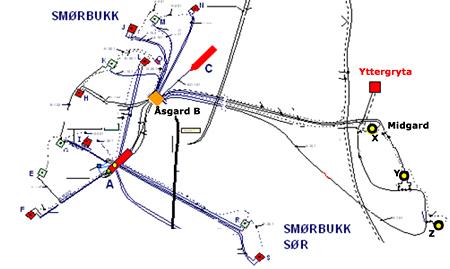 Yttergryta is a field in the Norwegian Sea, 33 kilometres east of the Åsgard B platform. The water depth is 300 metres. Yttergryta was discovered in 2007, and the plan for development and operation (PDO) was approved in 2008. The field was developed with a subsea template connected to the Åsgard B platform via the Midgard X template. Production started in 2009.

Yttergryta produced gas from sandstone of Middle Jurassic age in the Fangst Group. The reservoir is at a depth of 2,400-2,500 metres.

The gas was transported to the template Midgard X and further to the Åsgard B facility for processing. The gas from Yttergryta had a low CO2 content, making it suitable for dilution of CO2 in the Åsgard Transport System (ÅTS).

Production ceased in 2011 because of water breakthrough in the gas production well. An attempt to restart production in 2012 failed, and the field was shut down. The facility on Yttergryta is disconnected from the Midgard X template and will be decommissioned at the same time as the Åsgard facilities.