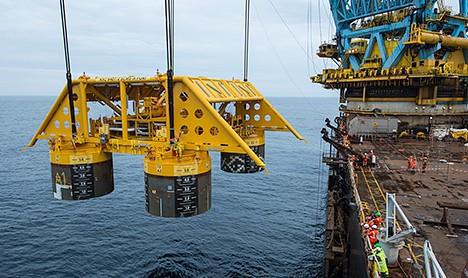 Svalin is a field in the central part of the North Sea, six kilometres southwest of the Grane field. The water depth is 120 metres. Svalin was discovered in 1992, and the plan for development and operation (PDO) was approved in 2012. The field comprises two separate structures: Svalin C and Svalin M. Svalin C is developed with a subsea template tied-in to the Grane facility, and Svalin M is developed with a multilateral well drilled from Grane. Production started in 2014.

Svalin produces oil and associated gas from massive sandstone of Paleocene to early Eocene age in the Heimdal and Balder Formations. The reservoirs are in marine fan deposits and have excellent quality. They lie at a depth of 1,750 metres.

The field is produced by pressure depletion and with pressure support from a regional aquifer.

The well stream is processed on the Grane field. The oil is transported by pipeline to the Sture terminal for storage and export, and the gas is injected into the Grane reservoir or used for fuel at the Grane platform.

Production has so far been lower than anticipated in the PDO. There are currently no plans to drill more wells on Svalin.