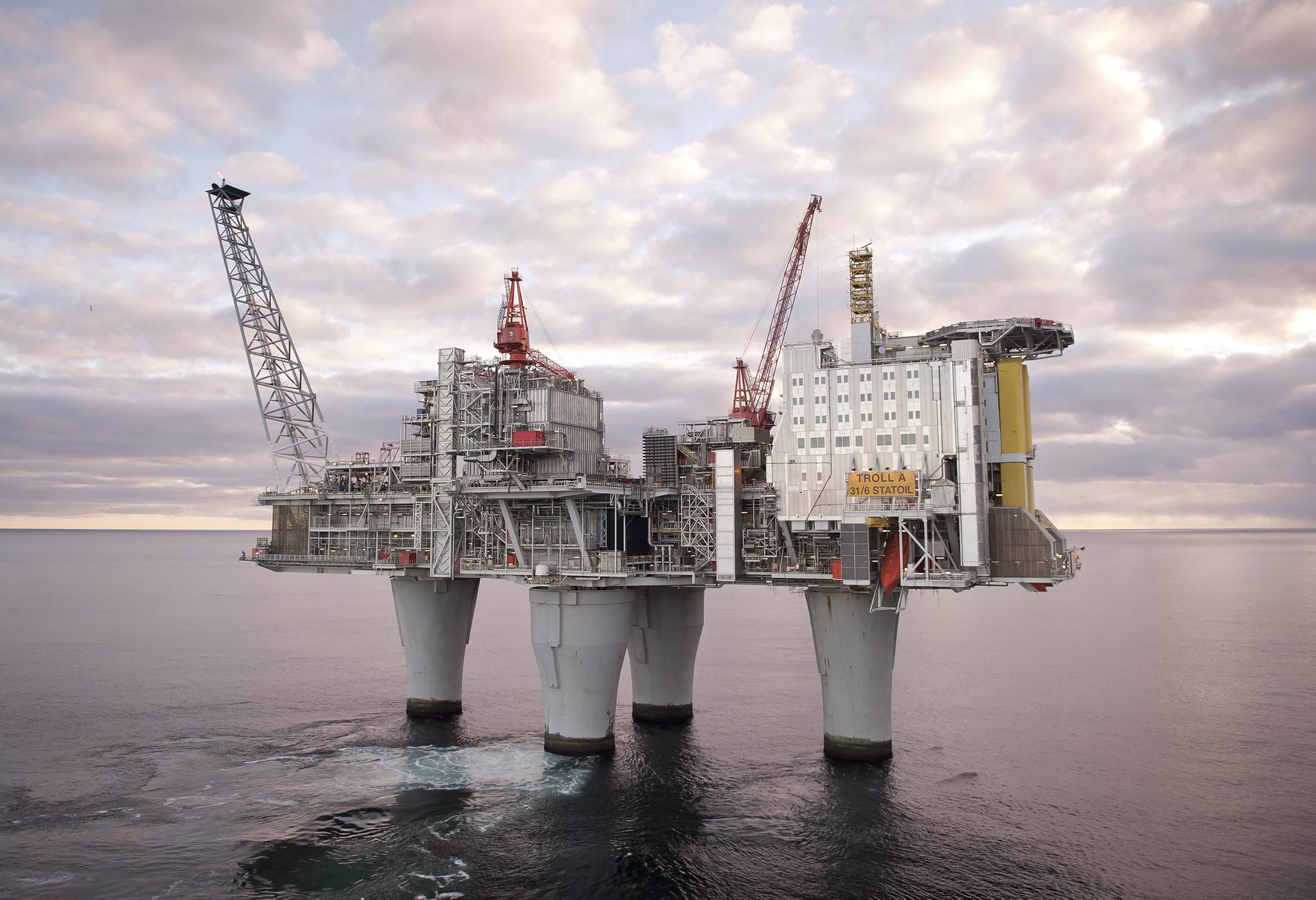 Troll contains very large amounts of gas resources and is also one of the largest oil producing fields on the Norwegian continental shelf. The field has two main structures: Troll Øst and Troll Vest. About two-thirds of the recoverable gas reserves lie in Troll Øst. The gas and oil reservoirs in the Troll Øst and Troll Vest structures consist primarily of shallow marine sandstone of Late Jurassic age in the Sognefjord Formation. Part of the reservoir is also in the underlying Fensfjord Formation of Middle Jurassic age. The field consists of three relatively large rotated fault blocks. The eastern fault block constitutes Troll Øst. The reservoir depth at Troll Øst is 1,330 metres. Pressure communication between Troll Øst and Troll Vest has been proven. Originally, the oil column in Troll Øst was mapped to be 0-4 metres thick. A well drilled in 2007 proved an oil column of 6-9 metres in the Fensfjord Formation in the northern segment of Troll Øst. The Troll Vest oil province originally had a 22 to 26-metre-thick oil column under a small gas cap, located at a depth of 1,360 metres. The Troll Vest gas province originally had an oil column of 12-14 metres under a gas column of up to 200 metres. The oil column is now reduced to a thickness of only 1 to 5 metres. A significant volume of residual oil is encountered directly below the Troll Vest oil column.

The gas in Troll Øst is recovered by pressure depletion through 39 wells drilled from Troll A. The oil in Troll Vest is produced from long horizontal wells, which penetrate the thin oil zone directly above the oil-water contact. The recovery strategy is based primarily on pressure depletion, but this is accompanied by a simultaneous expansion of both the gas cap above the oil zone and the underlying water zone. Some gas is also reinjected. Produced water was reinjected into the northern part of the Troll Vest oil province from 2000 to 2016.

About 279 production wells, 605 branches and more than two million reservoir metres have been drilled on Troll. There is currently one drilling rig on the field, continuously drilling horizontal oil production wells from the subsea templates on Troll Vest. To produce the thin remaining oil columns on Troll, focus has been on developing and implementing new technology for cost effective drilling, more accurate well placement and technology for constraining water and gas production from the oil wells. To increase gas production and processing capacity for Troll and the tied-in Fram field, a new gas compressor module on the Troll C platform started operation in early 2020. The first step on Troll Phase III, which comprises 8 new gas wells on Troll Vest and a flowline to Troll A facility is developed and gas production started in 2021.

The gas from Troll Øst and Troll Vest is transported through three multiphase pipelines to the gas processing plant at Kollsnes. The condensate is separated from the gas and transported by pipeline to the Mongstad terminal. The dry gas is transported in Zeepipe II A and II B to Zeebrugge in Belgium. The oil from Troll B and Troll C is transported in the Troll Oil Pipelines I and II, respectively, to the oil terminal at Mongstad.

Troll is a field in the northern part of the North Sea. The water depth is 300-330 metres. Troll was discovered in 1979, and the initial plan for development and operation (PDO) was approved in 1986. The plan was updated in 1990 and involved the transfer of gas processing to the Kollsnes terminal. Production started in 1995. A phased development was pursued for the Troll field, with Phase I recovering gas reserves in Troll Øst and Phase II focusing on the oil reserves in Troll Vest. Troll Phase I has been developed with Troll A, which is a fixed wellhead and compression platform with a concrete substructure. Troll A receives power from shore. The gas compression capacity at Troll A was increased in 2004/2005, and again in 2015. Troll Phase II was developed with Troll B, a floating concrete accommodation and production platform, and Troll C, a semi-submersible accommodation and production steel platform. The oil is produced from several subsea templates tied-back to Troll B and Troll C by flowlines. Production from Troll C started in 1999. The Troll C platform is also utilised for production from the Fram field. Several PDO amendments were approved in connection with various subsea templates at Troll Vest. A PDO for Troll Phase III (gas production from Troll Vest) was approved in 2018 and production started in August 2021.